How can you use the Allegro Network Multimeter to quickly and easily examine the load on a network? Let's take a practical example: multiple users complain that their network connection is sometimes very slow. For example; an event between 9am and 10am.

First we start with an overview in the Dashboard. Open the web interface via a browser. 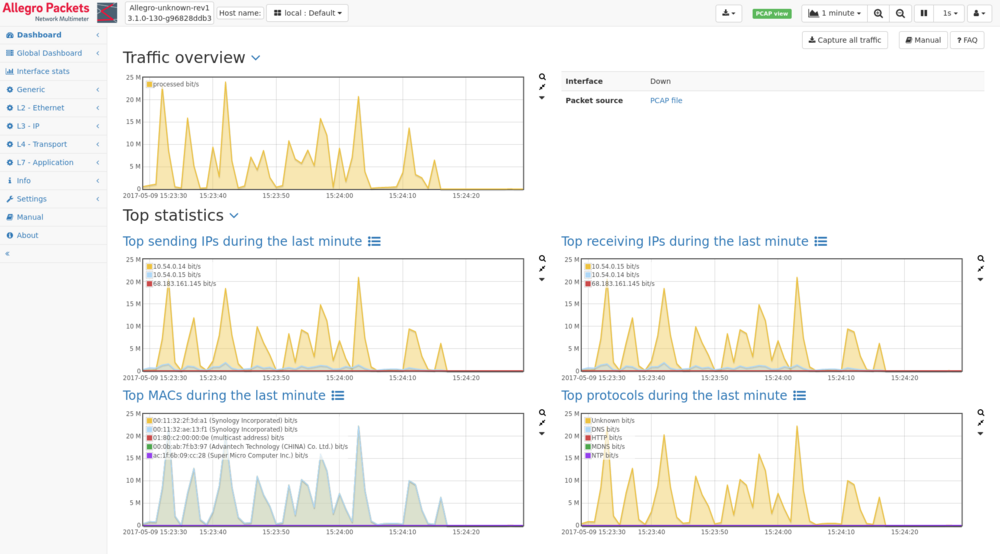 Next select a time view in the upper right corner, which is a longer timeframe than the interval to be examined:

In this case, we are looking for events from this morning and I chose the previous day's view. Now select the time period in which the users have reported problems by selecting (click 'n drag) such section with the mouse:

The Allegro Network Multimeter's internal database now works with the selected time interval so you can investigate what problems there were. The following points are easy to clarify on the Dashboard:

In our example, Dropbox showed up with a total of 900 MB data transfer. By clicking on "Dropbox" I can easily see an overview of who triggered this traffic:

By clicking on the IP address, then on the tab "Connections" you can sort the connections by TCP retransmission:

You can use the number of retransmission to estimate if there was a bottleneck between the Allegro Network Multimeter and the recipient and if more packets had to be retransmitted. Here in our example, there were 1.4 percent (6MB of 448,2MB) retransmissions with an approx. 12 MBit/s (upload) to Dropbox. Possibly the uplink was busy at this point and dropped several TCP packets.

If you need an even more detailed analysis, you can use the pcap button to extract the connection packets.