This section describes the ring buffer configuration and options for the Allegro Network Multimeter.

What is the ring buffer? 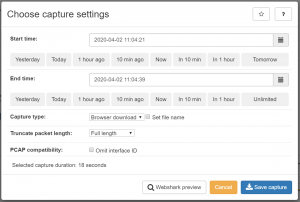 Allegro recommend you to take a look at the ring buffer White Paper from the Allegro Packets website.

The Webshark and the pcap extraction works with historic dates as in the screenshot here on the right. This dialogue is shown by using the pcap button in the Allegro User Interface. The Allegro Network Multimeter will search for all packets in the ring buffer if they match the criteria and extracts the packets.

If there is no ring buffer configured, the Allegro allows a pcap extraction of live traffic only.

The cluster ring buffer mode allows to use multiple ring buffers where each ring buffer can have multiple disks. It allows having a separate disk for pcap files which allows fast ring buffer and fast pcap to disk writes at the same time.

You can activate and deactivate the storage device for pcap files here. You can also format new disks by using the format option and erase the content of a disk if required. If the disk has not been formatted before, press the Format button here. It will show the dialogue: 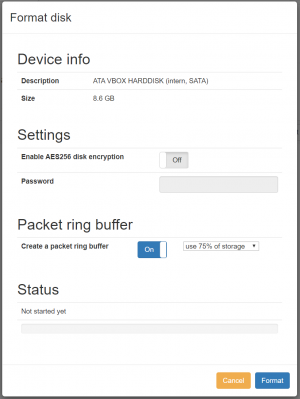 Here you can decide whether disk encryption will be used or not, see #Encryption below. You can also decide if and how much space can be used for the packet ring buffer. Please note that you cannot save any pcap files to the external disk when you use 100 % for the ring buffer.

If the disk has been formatted, you can continue with the configuration of the ring buffer at Generic → ring buffer. If you have created a disk with a ring buffer, you should see the statistics of the buffer as in the screen shot here below. 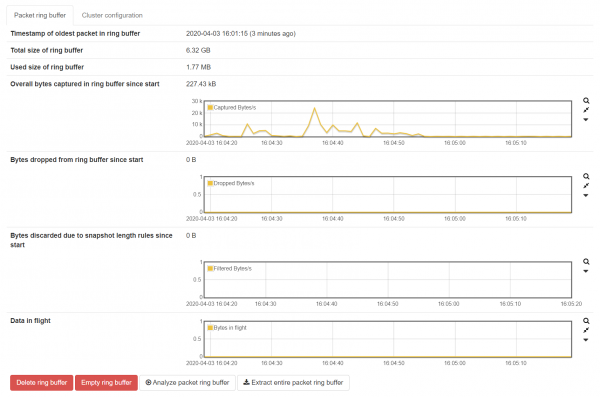 The ring buffer is now running and all pcap buttons will work for historic dates. For advanced setup, please continue at the section #Filter Rules.

The cluster ring buffer is the default mode on all Allegro Network Multimeters that are shipped with two or more internal or external storage devices.

By default, the Allegro Network Multimeter uses One cluster ring buffer. If you need more, please open the Settings menu at the top right corner.

Here you can increase the number of cluster ring buffers. We will continue this tutorial with 2 ring buffers to show the full flexibility of the Allegro. Please note that you need to restart the processing when you change the parameter. This can be done at Settings → Administration → Restart processing.

Once this is done, you should see the dialogue:

Here you can select Create cluster ring buffer. Once this is selected, you will see all available clusters of ring buffers. By default, the first cluster is running but has no disk assigned to it. The size of the buffer is 0 Bytes and it drops all packets written into it. 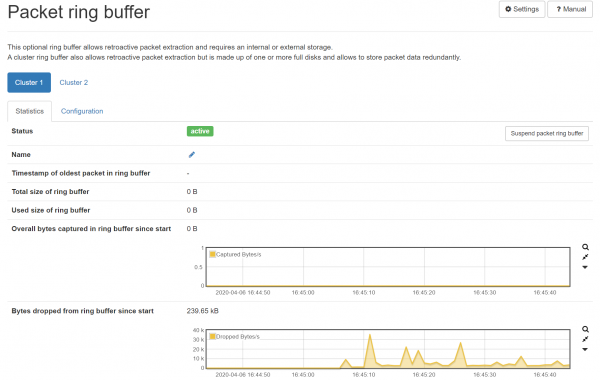 As a next step, please select the configuration for the cluster.

Please select here Add to cluster to format a disk and add it to the cluster. Once you have added disks to a cluster, the packets will be written to the storage device. 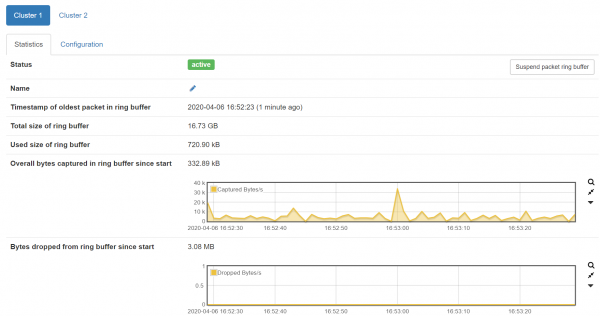 Both ring buffer modes support packet filtering mechanisms. Most situations require that only a subset of all packets are stored to the disk. Each ring buffer can be configured by a separate list of rules. All packet that do not match a condition are captured. The first matching condition is applied to the packets.

All conditions can be negated to match everything except an IP subnet and similar.

The following items are supported as actions:

Filter rules can be set up below the statistics of each ring buffer. This is a list of the most-used filter rules. Note that you can combine these rules.

Capture all traffic from and to a single IP

This use case is valid when you need to investigate the packets of one IP but you need the statistics of the total link. This is a common use case where the link bandwidth is above the ring buffer write rate. As an example, it can occur when you monitor a heavy loaded 10G or 40G link with a single HDD as the ring buffer device.

You need to set up 2 rules to capture only one single IP. The first rule matches the IP address and captures the entire payload, the second rule drops all packets. This will also drop all non-IP packets like ARP requests.

Also a common use case is to not capture encrypted content. This can be done by setting up a rule for SSL after handshake packets to capture only up to the L4 header for IP and TCP investigation. This can be configured with the following settings:

Capture full SIP, capture RTP to the first 12 bytes of the payload and drop all other packets

This is a common VoIP use case where you are allowed to capture the signaling traffic and the RTP header ( 12 bytes ) but not the RTP traffic payload. Here is the example rule setup:

Capture all packets except SIP and RTP

This use case is very common for all environments where no voice is allowed to be captured. Here is the example rule setup:

Note that one disk can have one shared ring buffer or be part of one cluster ring buffer. Hard disk drives have a high constant write rate when only one write is active.

The Allegro Network Multimeter has a write first policy on the ring buffer devices. The Allegro prioritizes writes over reads for storage. A pcap read can be very slow when there is a high write rate to the ring buffer.

Note that HDDs are not made for 2 simultaneous write streams. The write rate will be very low if you capture a live pcap to the single shared storage device while having an active ring buffer. Please use the browser download feature, different disks with the cluster ring buffer or pause the ring buffer while capturing the live pcap.

Note that most HDDs and SSDs do not have a guaranteed write rate. Especially HDDs via the USB or SATA3 protocol can have downtimes of hundreds of milliseconds between writes. Each ring buffer uses a certain amount of memory to buffer traffic peaks. This buffer can be configured at the Settings of the ring buffer

You can check if the queue length is large enough with the Bytes in Flight graph and the Dropped Bytes graph in the ring buffer statistics.

DISCLAIMER Whenever possible, use a direct-connected exclusive external storage device via USB. The Allegro Network Multimeter can control the USB channel far better than an iSCSI channel due to exclusivity.

The iSCSI ring buffer feature allows you to mount an iSCSI volume via the management interface. Allegro recommends to use this feature only for capture rates up to 1GBit/s. The iSCSI controller will have an exclusive low-latency connection to the Allegro Network Multimeter and the rate shall be exclusive to the Allegro Network Multimeter. Also, the management traffic between the Allegro and the iSCSI rate will not be monitored by the Allegro to prevent a write loop. If the rate is non-exclusive, other reads or writes will heavily reduce the constant write rate. Note that the iSCSI connection is not encrypted.

The Allegro Network Multimeter uses EXT4 for all formatted file systems for the ring buffer. EXT4 file systems support advanced features that are mandatory to capture with full SSD speed.

The Allegro does not store the password of the encrypted device on the disk. you need to re-enter the password if you unmount, reboot or power-off the Allegro Network Multimeter.

The encryption is not available for the cluster ring buffer.