Incidents are used to alarm the user when configured network events occur, usually for traffic based rules, but also for system-specific events. These notifications can be viewed in the web GUI and may also be delivered by email or syslog. Repeating incidents are counted as such and the time of the first and last occurrence of an incident is remembered. What makes an incident unique depends on the type of incident.

The incident feature allows to define rules which are checked on the configured trigger point, like when a connection ends, a SIP call ends, or for checks on ongoing traffic. When such a trigger hits, configurable traffic attributes will be checked and if all attributes of a rule matches, an incident is created.

Occurred incidents can be seen in the web interface, and additionally reporting via email or syslog is possible too.

The first occurrence of a medium or high severity incident will also trigger a status notification which is visible at the top right of the web GUI. 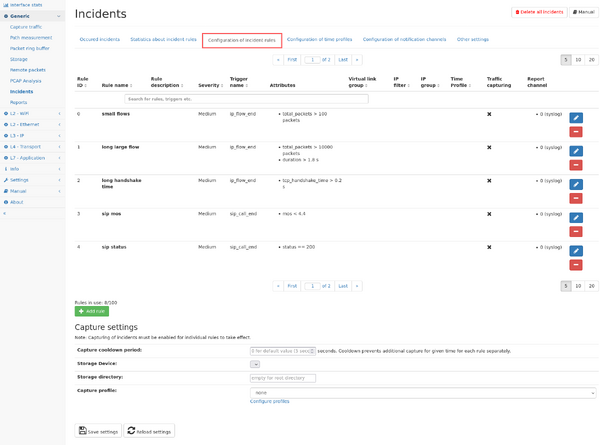 Incident rules can be defined in the "Configuration of incident rules" tab in the menu "Generic -> Incidents". All changes to the rule configuration will only take affect after saving the current configuration by clicking on the save button at the bottom of the page.

The page shows a table containing the existing rules and their configuration.

New rules can be added by clicking on the "Add rule" button. A dialog appears allowing for configuration of the rule. The same dialog is used when modifying an existing rule. 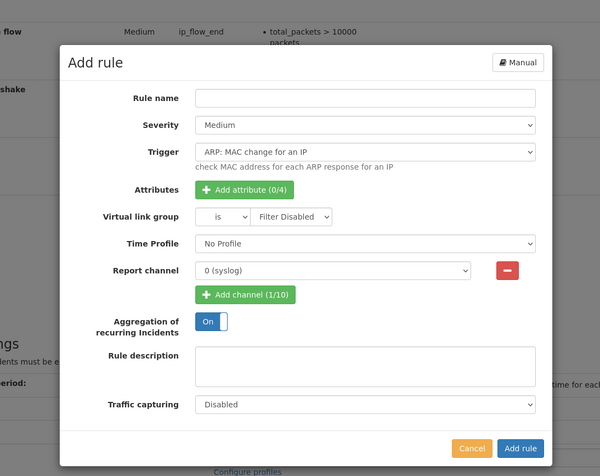 A rule is defined by the following settings:

Some trigger are checked continuously every configured time span period, so the incidents are generated differently than for fixed event specific triggers like a call end.

So for repeating incidents you will get repeated incidents for the same attribute every time span. For example, if an IP address has traffic of 100 mbit/s for 2 minutes and a rule checks for more than 50 mbit/s over 30 seconds, the rule will hit 4 times. There will be one incident which will contain the exact number of repetitions for reference.

For start/stop incidents, you will only see two rule hits and the incident description will state the start and stop time.

Incidents can be reported on different channels. The configuration allows to add new channels so they can be selected in the rule configuration described above.

Each channel can be of type:

Each channel also uses a minimum severity settings so only incidents are reported which are of at least that severity.

Each channel can be configured to only handle incidents from live traffic or from replayed traffic.

Burst incidents with milli-second resolution can be generated when the interface throughput exceeds a configurable threshold. The incident contains a graph of traffic for that interface with some data points before and after the threshold has been exceeded depending on the measurement interval. A PCAP link for capturing from the packet ring buffer is shown. For further investigation of that incident, the button Use as global time range can be used to set the global range to the start and end of the incident graph (at least 5 seconds) so that all modules of the Allegro Network Multimeter show that time span. The incident generation can be configured as follows:

This page shows up to the last 1000 incidents occurred on the system. The table can be filtered for specific severity levels, as well as for specific trigger sources by selecting the trigger from the drop down menu.

Filter incidents by severity or trigger

The list can also be filtered for the subject of the incident.

Individual incidents can be view in detail by clicking on the subject. The details page shows detailed information including links to the relevant measurement page.

Since incidents are triggered by different measurement modules (as indicate by the prefix of the trigger name, like the mac or ip module), the list of incidents from that specific module can also be seen in the corresponding tab of the measurement module for quicker access. This per-module view only lists those incidents coming from that module, all other potential incidents are hidden and must be accessed in their corresponding module page, or in the global view in the "Generic -> Incident" menu.